Enterprises across all industries looking to keep pace with the speed of modern innovation are turning to large-scale automation to drive growth and reduce risk company-wide. Still, many teams facing an upcoming move as major as the one to SAP S/4HANA struggle to maximize their automation potential. Even more teams feel overwhelmed by the prospect of such a huge digital transformation. In a recent report, 90% of respondents said that, for a move that significant, their organizations weren’t ready.

But all hope is not lost; many teams are embracing innovations available to them and undergoing successful, timely transformations, as impossible as that may sometimes seem beforehand. In any industry and at any size, the key is to prepare early and often, involving not only your team but your business stakeholders from the jump.

At a recent SAPinsider event, Jeenda Sri Ranjan, Founder and CEO of THREERUN, explained how early incorporation of your business stakeholders, coupled with a robust automation strategy and infrastructure, can help pave the way for a successful SAP S/4HANA migration and beyond. In this blog, we’ll unpack some of these key themes in detail.

Build a Cross-Functional Team Beyond Your IT Organization

There are a few strategies organizations can employ when it comes to release management, but most often, there’s a dedicated team doing regression testing to ensure all systems remain functional and optimized throughout and beyond migration, in a perfect world. But teams looking to build large-scale test automation need in-depth process knowledge, which is characterized by decentralization and localization.

In a smaller, more regional business unit, teams find success by hiring functional experts to discover processes and test their systems. But in an enterprise organization that does business throughout regions, countries, and the world, it’s crucial to involve your business stakeholders as early as possible to enable large-scale automation.

Involving your business stakeholders means understanding their many connections to your organization and its infrastructure. As automation’s capabilities expand, understanding as a function has become a key component. Many tools, like Process Intelligence from Worksoft, boast the crucial ability to give you insight into your business processes.

Process intelligence works by collecting the event log of every step taken during a specific action, thereby discovering that process and allowing teams to analyze it as it relates to the larger whole. The power of crystal clear, 360-degree insight, combined with the voice of your customers and other stakeholders, reduces risk to a minimum.

Once a team has a clear view of its business process landscape, it can begin the next step of large-scale automation, which is when the actual testing begins. In a classical product approach, teams design automation scripts, extract and generate data, and then execute and generate reports. From there, they can review the results and adjust as needed. This standardized approach has a repetitive and uniform cost and a general functional utility.

However, in the modular approach described by Sri Ranjan in his session, teams decouple request management from the automation cycle and utilize reusable test scripts to drive efficiency throughout the entire organization. End-to-end processes are linked to each other at their activity level. Connecting these scripts on an operational level creates synergies beyond one specific business process.

For example, in traditional methodology, the customer service or delivery teams might meet with the test automation team and request specific automation corresponding to specific functions, and the testing team would then work to build that automation. In modern, modular frameworks, those testing teams work from reusable scripts developed using data in the discovery phase and avoid reinventing the wheel. Instead of a 1:1 relationship between each request and automated script, multiple requesters can benefit from a wide range of reusable scripts.

Enable S/4HANA Transformation with Intelligent Automation at Every Step

By this point, most organizations understand that automation should play some kind of role in your business process lifecycle. The modular approach, as described by Sri Ranjan, involves breaking apart the chain of automation running through the organization to utilize its technology in all phases and stages of your upcoming, ongoing, and completed S/4HANA transformation.

This doesn’t mean engaging incohesive automation. Within the modular framework, there are five stages of successful digital transformations. In the “Discover” and “Prepare” stages, teams facilitate system cleanup – cleansing outdated tables and stored data, and checking code readiness –  to understand the full scope of their business processes. In the following “Realize” and “Deploy” stages, teams are setting up and running tests, increasing confidence as their own business and process data are tested. And finally, in the “Run” stage, teams are taking the data gleaned from highly intelligent automation during migration and using it to optimize their business process landscape.

Lift & Shift Your Stakeholders Within Your ECC

The key is in the foundation. Teams who take the time to engage stakeholders, extract data, and gain crucial visibility begin their migration on the most solid footing possible, reusing existing ECC GUI automation for S/4HANA. Below, in a diagram from Sri Ranjan’s session, you can see that, in an ideal world, key stakeholders are located at the experimental stage of the change management learning curve. The higher the level of commitment in the ECC world, the better-prepared teams are for an upcoming S/4HANA transformation. 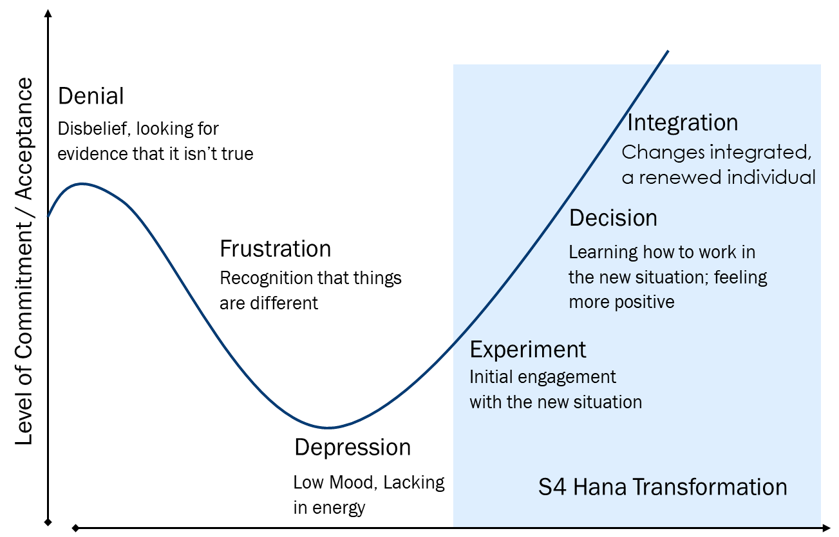 Drive Continued Efficiency with Holistic Test Automation Before, During, and After Migration

Test automation can and often should be employed in each of the stages and clusters described above. Choosing a testing partner that can handle that level of intelligent automation at each phase of your S/4HANA journey is one of the best ways to guarantee success throughout. The Worksoft platform offers advanced process discovery to uncover and unpack your business processes, premium test automation, and RPA for continued, seamless integration in SAP and beyond.

With the same platform extracting your data and building test automation from that same data, you’ll have the in-depth process knowledge to enable your team to quickly assess new demands and initiate the script creation and script adaption process, leading to a reduction of up to 75% in script creation cost. Execution management within the same platform leads to test cases at least eight times faster than manual execution. An automated approach also means that over 40% of end-to-end test cases are being conducted overnight, increasing the overall test execution capacity and freeing up your nights and weekends.

The modular approach to automation supports cost-optimized scripting and minimized maintenance. Simultaneously, it enables a fast integration in case of new requests and the ability to adapt existing scripts for upcoming SAP S/4HANA transformations. An added benefit of a truly cohesive platform and automation partner is that the tools built and discovered during a large migration like the one to S/4HANA can be leveraged ad nauseum for your organization.

Ready to learn how an intelligent automation partner drives value for enterprise organizations just like yours? Talk to a Worksoft expert today.