Prepare Your Organization for SAP S/4HANA Implementation with Process Excellence

Test automation is one of the tools enterprises are engaging to achieve a smooth migration to SAP S/4HANA. While many are enjoying some of its benefits, many more aren’t taking full advantage of automation’s capabilities. Taking a holistic approach offers valuable insight into an organization’s strengths, weaknesses, and needs during a large-scale implementation, which in turn leads to a more robust end result.

At a recent SAPinsider conference, Heather Whitfield, Process and Test Automation Manager, Applied Materials, explained how Process Excellence is often overlooked as a crucial part of a successful S/4HANA migration for enterprise organizations. This excellence can only be achieved with a thorough understanding of your business processes from top to bottom, best developed through automation. She also explored how her team's holistic approach to their S/4HANA journey will provide the robust automation capabilities needed to smooth migration as well as maintain continuity in a post-migration world.

In this blog, we’ll explore how teams are engaging automation earlier to drive efficiency not only during migration but also before, while planning, and after, while settling into a new and, hopefully, optimized normal. Although there are defined best practice steps for S/4HANA migrations, every SAP S/4HANA project has its own complexities, and it's important to also evaluate and learn from how other organizations approach, prepare for, and are finding success to help you build the best roadmap for your own future projects in SAP and beyond.

Why Make the Move to SAP S/4HANA

While there are a variety of strategies to accomplish a large-scale migration like an SAP S/4HANA implementation, almost everyone can agree that minimal risk and maximum efficiency are top priorities. In the digital era, this requires digital solutions that can meet modern challenges like an increased speed of change and razor-thin margin for error.

By 2027, the end of ECC maintenance will officially arrive. This means any and all SAP organizations will have to have already moved to S/4HANA by that time. For those not already planning their implementation, it’s a heavy lift. Still, for an SAP organization, the move to S/4HANA offers the chance to optimize their operation, significantly reduce risk, and safeguard their SAP investment.

With the right strategy and the right test automation solution engaged, the process can be as painless as possible and will lead to significant upgrades that will, in the end, lead to improved end-user satisfaction, better integration and movement of data across systems, improved processes and analytics, and the ability to modernize your cloud strategy.

Engage Automation Throughout the Entire Implementation

Everyone knows going in that they’re going to have to test and test a lot to mitigate risk and drive their digital transformation. Teams continue to choose automation as an effective means to speed their testing efforts. But automation and other adjacent tools can be leveraged long before testing ever begins. Through process capture, discovery, and documentation, teams can pinpoint what needs to be tested.

By understanding the full scope of their business processes, teams can actually use the S/4HANA migration as an opportunity to accelerate their digital transformation, removing and rearranging key processes before the move and, in turn, leaving less work when the migration is complete.

According to Heather, it's imperative that organizations “don’t think about automation as just testing something that you’re going to do later. It really needs to be considered in planning so you can get all the people that you need, the tools, the budget–all of that–lined out and then evaluate which tools are going to help you.”

Knowing which processes to automate remains one of the biggest roadblocks to implementing automation for S/4HANA for 46% of respondents in a 2021 SAP Users Survey. It’s the same challenge with testing. And as much as we'd all like to test everything, testing everything would be time and resource intensive. That said, you also can’t just test a few big processes and leave all the others to chance.

Process discovery has become and remains one of the best ways to use automation before you even begin testing or automating existing/new processes. From mining to capture to documentation, the capabilities of process intelligence are a comprehensive solution to an unclear as-is business process landscape.

An ideal business process flow is a visibly defined set of lines from a set of organized, efficient processes. The reality looks more like the below diagram. 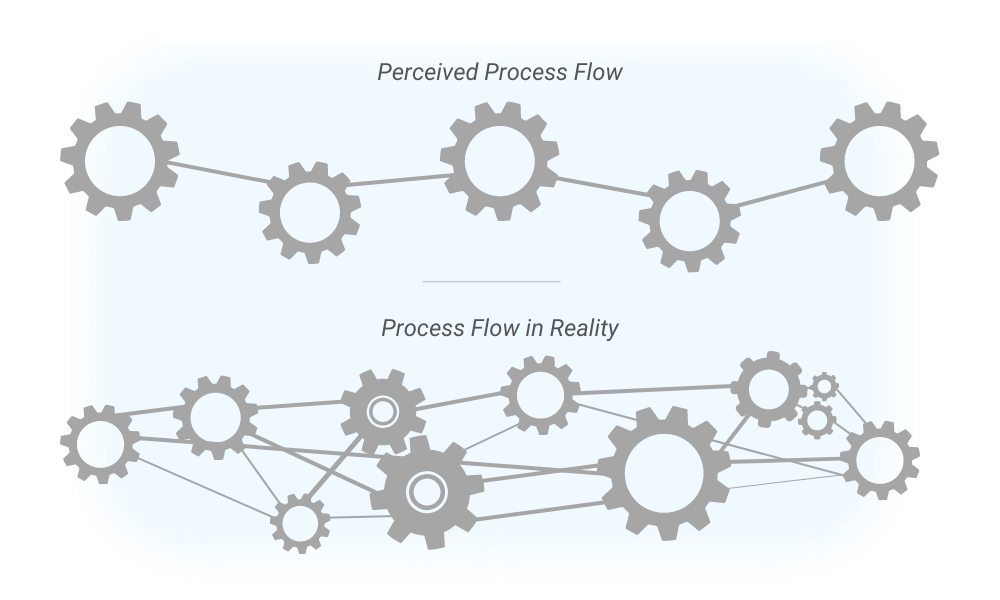 Even if your complex web of processes are working perfectly, they’re often near-impossible to understand at a glance, much less interact with or change without breaking something. Process intelligence eases these complexities by enabling you to more clearly understand your landscape through an automated approach.

“If you use the right tool, you can capture those processes and then have it generate a document that is visualized as a process flow and then you can overlay those together and really look at some of those bottlenecks are and where some of those opportunities to optimize are. You can get a more end-to-end process view.”

Those outside testing and implementation at your organization know some of the benefits they’ll enjoy once the move is made, such as end user experience and improved security. In SAPinsider’s Benchmark Report 2022, 58% of executives cited SAP S/4HANA as their most strategic SAP investment, double the percentage vs. any other strategic investment area. Clearly, business leaders know this is an important project. s

But beyond that, you and your testing team should understand that one of the most exciting benefits of an S/4HANA implementation – and any large-scale update – is the chance to clean house and build an automation roadmap for future automation and digital transformation goals while you work to prepare, execute, and maximize your SAP investment.

“It’s kind of like when you’re getting ready to move. Do you just throw everything in boxes and load it on the truck and move it and sort it out later, or do you sort it now and get rid of some junk before you move, because you know you’re going to have to pay to move it?”

If you decide to bring it all, including the processes, systems, and data you don’t need and is simply weighing down your organization, you’re doing so with the awareness that someone (you) will have to prioritize it at some point. Choosing to make this organizational effort part of your S/4HANA migration allows you to start fresh and prioritize even more exciting digital innovations.

Maximize ROI in a Post-Migration Environment

When done right, planning thoroughly for your S/4HANA implementation and engaging automation holistically leads to a successful migration and a noticeably more efficient landscape for your organization once it’s done. While automation and its capabilities continue to become more versatile, some teams are still making the mistake of removing some of their automation and automation assets in the aftermath rather than using those powerful tools to thrive in the new normal.

A successful, holistic SAP S/4HANA project that treats automation as a new and semi-permanent member of the team has three steps.

While these tools are highly effective for organizations switching to SAP S/4HANA, automation can drive efficiency and reduce risk in a variety of projects and stages. Choosing an automation partner you can trust is a vital part of any successful digital transformation. We hope these tools give you more insight into the complexities of an S/4 implementation and how automation can face some of those challenges. If you’re ready to learn more about what automation can do for your team, we’d love to chat – click here to talk with an automation expert.