Automated Testing for Enterprise Apps: Why it’s Important and How to Measure Success

Since enterprise applications provide the foundation for running many profitable businesses, it's imperative to comprehensively test these apps before deploying them in a live production environment. Automation plays an important role in testing enterprise apps by allowing testers and developers to assess:

One goal of test automation is to conduct tests more efficiently, which is vital for today's fast-paced application environments. Since enterprise apps are mission-critical, they need to be tested thoroughly and swiftly.

The EMTE metric provides a simple and meaningful measure of the value that automation provides when testing enterprise apps. EMTE is a measure of the time taken to run a given suite of manual tests.

You can use EMTE in several ways, including comparing it with the speed of running the same automated tests. You can also compare the time taken to build automated tests with the EMTE for manual tests in order to identify at what point automation provides positive ROI.

Enterprise apps are critical to the smooth functioning of a business—serious defects that escape into production after the release of these apps can spell disaster. Consider the case of RBS, a large British banking group. A failed software upgrade made RBS' online banking services inaccessible, resulting in a £56 million fine from regulators.

Effective automated test suites must catch all serious issues before they manifest in production, and this metric gives a “bottom line” measure of automated testing effectiveness.

Many test automation tools display a test execution metric in their dashboards, showing the total tests executed as part of a build. While test execution is not ideal for making judgments on software quality, it's still important that the majority of the tests run in all builds. 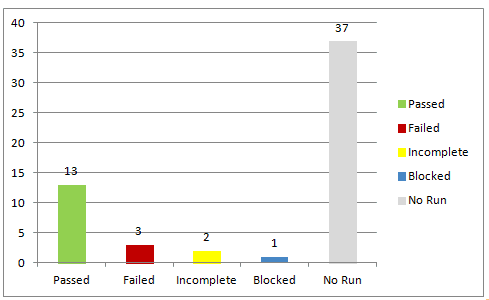 Measuring cycle time is extremely useful for enterprise apps, particularly in terms of insights revealed about automated tests. The key is to start tracking cycle times as soon as you can, and investigate variations in those times. For example, if your defect cycle time jumps from one day to seven days, automated tests may be failing and slowing down deployment, becoming a bottleneck process.

Test automation, while useful, is not enough on its own for delivering higher quality enterprise applications with fewer defects.

Automation is not as easy as buying a tool that automatically runs tests and outputs results. Effective test automation efforts should focus on the right test automation metrics in order to drive improvements in testing efficiency and the quality of the underlying enterprise apps.

Lastly, enterprises should think about automation in parallel, instead of the traditional linear automation model, so that QA automation can transfer to all stages of an enterprise app’s project lifecycle for even greater efficiency. This way, automation is an ongoing process, with new test cases being auto-generated each time something changes. This also delivers benefits in the way of automatic compliance reports that can be created after each test run.

If Quality is so Important Then Why Isn’t QA?
Read More