Rise of the Digital Worker Through Robotic Process Automation

Robotic Process Automation or RPA tends to have a nebulous, catch-all meaning like its friend, “the Cloud.” Each garners a lot of buzz and cache, whether at business meetings or over cocktails. When the topic comes up, the meaning of RPA generally spans several versions of the truth. This article exposes RPA through a different lens without relying on trendy phrases like machine learning, artificial intelligence, bot or process automation.

For example, let’s say you have numerous recurring orders received via email. Today, a worker must open the email, review the invoices, manually create an order in your internal system, generate a packing slip, and loop back with the customer. This task follows a repeated pattern. However, because of its muscle-memory nature, blindly completing this repetitive task could lead to mistakes in data accuracy. Insert here a robotic process, written to look for specifically worded emails, open attachments, review invoices, accurately create an order and send the customer a confirmation with a tracking number.

The premise is that by employing RPA, a business can increase productivity and resolve many of these issues using software-driven task-focused bots. However, before implementing RPA becomes a reality, you must ask yourself a few key questions. First, does the business fully understand all critical processes and recognize where inefficiencies or improvements are needed? Second, can the business find enough processes to automate to justify bringing in an RPA solution financially? Third, are these targeted processes consistent, or do they vary daily? Processes that aren't consistent with repeatable steps are considered "too fragile" for RPA. Lastly, how will your employee base embrace a bot taking over a portion of their work? Will they consider them a coworker or a threat?

Era of the Digital Worker

RPA has made it through much of Gartner’s Hype Cycle arc in its relatively short history, from headline-worthy valuations to headline-grabbing layoffs and shelfware of bots was a warning sign for the entire RPA market. And now we've entered the “Slope of Enlightenment” phase, which ushers in the rise of the Digital Worker. 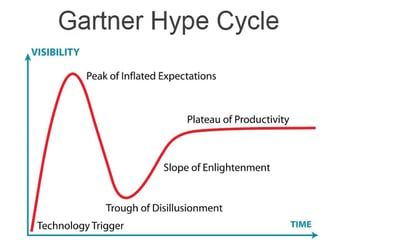 The term Digital Worker has an immediate human association that most can easily embrace, unlike RPA, which has a sterile and lifeless connotation. To clarify, this is not a rebrand of RPA to Digital Worker. However, the association between RPA and the Digital Worker can create a more open, transparent and collaborative mindset with employees. Whereas, RPA seems to immediately equate to bots with something that will ultimately replace humans. While I don’t believe RPA has been fully rationalized yet, the rise of the Digital Worker is the true news story here.

How to Use Your Digital Worker

Companies with TCoE and QCoE are Centers of Excellence responsible for testing and quality assurance. Their real asset is the understanding of processes at a molecular level and an ability to provide end-to-end testing of non-production environments, ensuring applications work as expected once they elevate to production.

Your Digital Worker will be on the other side of the fence, working in production. To employ your Digital Worker securely and with the greatest return on investment, you will need the business to drive identifying areas needing automation, which might come from many business units, including Order Management, Finance, Accounting and Supplier Management. IT will ensure bots operate within your security and compliance structure.

An age-old question that every worker has top of mind or somewhere in the recesses: Will a physical robot or software bot eventually replace my job? The answer is maybe. In manufacturing, welding and painting robots took over human jobs. The use of a robot here was not by accident. It was because both have multiple side effects that are dangerous to humans, the toxic fumes as an example. Outside of eye strain and mouse wrist (carpal tunnel) the case for a bot taking over a human position is not hazardous to humans, but rather an opportunity to align for a better business outcome. RPA gained initial popularity because it could help reduce costs through headcount elimination.

In theory, a bot is 5x more productive than a human, so an order entry department could eliminate most humans and allow bots to handle the workload at a fraction of the cost. However, as RPA has matriculated through the Hype Curve, what we see now is less human replacement and more human and bot collaboration opportunities to drive results and increase value. When you see examples of manufacturing and warehouses using exoskeletons, the cool factor alone makes everyone want one. I envision a universe where bots act more like an exoskeleton, and everyone wants one or two on their team.

There is a bright future ahead for the RPA Digital Worker. An opportunity exists today that has previously eluded RPA in the past to deliver real and sustained value to the business while embraced and welcomed by human workers. CIOs like RPA because it can immediately create value, reduce needs for IT builds and deliver automation in six weeks. Human workers like the idea of a Digital Worker helping to improve their workday by allowing them to be more efficient, eliminating routine activity and reducing mistakes. Taking an opportunity to unite business needs with human needs around a common tool is not just powerful, but also critical to success in the post-COVID era.